As the costs of higher education continue to be a concern for today's students and their caregivers, NPC encourages Alumnae Panhellenics to put an emphasis on scholarships in their annual programming efforts. Scholarships can provide students with the needed assistance to pursue their life’s passions.

"The Cleveland Alumnae Panhellenic has proudly supported a scholarship program since 1915 – 103 years! We are fortunate to have a separate foundation, Cleveland Alumnae Panhellenic Endowment Fund (CAPEF), holding more than $200,000. CAPEF has its own bylaws that govern how the money is invested and managed. CAPEF recommends a scholarship amount to be distributed annually and CAPA considers the recommendation and votes to approve the amount to be awarded. We share our fall fundraiser profits with CAPEF and host an annual scholarship luncheon where scholarship winners are recognized. During the luncheon, CAPA's Ways and Means committee puts together a basket raffle that benefits CAPEF. We typically raise $2,000-$2,500 towards future scholarships.

Our Alumnae Panhellenic promotes our scholarship program in a few ways: 1) Each delegate contacts their headquarters and asks for an email contact list by zip code (our surrounding 7 counties) of women currently enrolled as collegians and forwards to our scholarship chair that email blasts out the information. 2) The scholarship chair sends the information via email to NPC and Ohio Colleges Panhellenic advisors to post on their webpages and promote at meetings. 3) Alumnae delegates promote to their own alumnae chapter members to encourage collegiate and alumnae to apply. 4) Alumnae delegates themselves promote to individual collegiate chapters (email, Facebook, Twitter etc.). 5) We host all of our scholarship information and documents on our website: clevelandpanhellenic.org.

The current CAPA president's sorority hosts an annual luncheon the 2nd or 3rd Saturday in May. The attendance varies from about 150-300 people. This year it will be on Saturday, May 18, 2019, 10:30 a.m. - 2 p.m., at the Cleveland Metro Parks Zoo - Stillwater Place. All are welcome to join us to see firsthand how we celebrate our scholarship winners!"

Posted by loretta@npcwomen.org at 8:30 AM

As the costs of higher education continue to be a concern for today's students and their caregivers, NPC encourages Alumnae Panhellenics to put an emphasis on scholarships in their annual programming efforts. Scholarships can provide students with the needed assistance to pursue their life’s passions.

"Our proudest accomplishment is the money we have raised for our Scholarship Awards Program. Scholarship fundraisers began in the 1940s when Phoenix Panhellenic Association held dances to earn money for scholarships. Over time, these efforts transitioned to a fashion show and luncheon.

All Council members and local alumnae clubs promote our Scholarship Awards Program throughout the year. Representatives attend College Panhellenic meetings, host events at the local universities, such as our Slices for Scholarships and Snacks for Scholarships, to encourage local collegians to apply for the Phoenix Panhellenic Scholarship Awards Program but to also research other potential scholarship opportunities through their own organizations and the NPC Foundation. Social media has enhanced our efforts and has an immediate impact with collegians. In addition, the movement of our scholarship application process from paper to online has increased our number of applicants.

Scholarship Awards Recipients and outstanding Panhellenic women in Arizona are recognized through our Woman of the Year and Emerging Leader of the Year Awards Programs at our annual Celebration of Sisterhood. We also invite the greater Panhellenic community, Fraternity and Sorority Life staff and College Panhellenic leadership from the local universities as well as other volunteers who help to make our fundraising a success. In May 2018, we awarded over $20,000 in scholarships, which included our first scholarship from the National Panhellenic Conference Foundation’s Phoenix Panhellenic Association Centennial Scholarship Endowment.

Phoenix Panhellenic has been fortunate to enjoy a 40+ year partnership with Thunderbirds Charities. For groups contemplating creating a new scholarship program or expanding their current one, our advice is to look for a partner -- ideally a large charitable organization that could provide the opportunity to turn volunteer hours into scholarship funds. Encourage Council members to share their fundraising enthusiasm beyond their immediate groups by going out to their local clubs, collegians, and communities to increase the awareness of your program and to increase your ability to supply the most volunteer hours possible to earn the maximum funds for your scholarship program."
Posted by loretta@npcwomen.org at 8:27 AM

National Campus Safety Awareness Month has been part of the back-to-school public conversation every September since 2008 when it was first approved by Congress. It’s the perfect opportunity for everyone in the fraternity/sorority community to continue the important discussions surrounding sexual violence, student care strategies, hazing, alcohol abuse and dangerous social cultures on college campuses today.

The National Panhellenic Conference has been vocal on the topic of student safety on campuses for many years and is committed to partnering with our student life colleagues to create cultures where students advocate for one another and find sustainable ways to shift the dangerous culture at a faster pace than it was created. 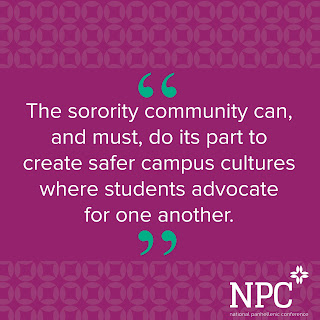 We have been and continue to be committed to providing resources and finding solutions to improve campus safety. Of particular note:

In relation to all of this, Sept. 24-28 is National Hazing Prevention Week, which brings to the forefront that campus safety includes being educated about hazing prevention. NHPW is an opportunity for college campuses, schools, communities, organizations and individuals to raise awareness about the problems of hazing and promote hazing prevention.

Importantly, NPC continues to advocate for state and federal legislation that appropriately defines hazing as a crime and mandates accountability as well as promotes transparency of reporting hazing incidents on college campuses. As we work to advocate and preserve the sorority experience, we are working to prevent the types of campus tragedies we have seen in recent years by educating and supporting our members and giving them confidence to report inappropriate behavior.

As I have said before: The sorority community can, and must, do its part to create safer campus cultures where students advocate for one another. That is why NPC will continue in its student safety and wellness advocacy work as well as lead efforts to change by bringing together campus professionals and other like-minded organizations and individuals to work toward creating the kind of campus culture we aspire to build everywhere.