Vision 2020, headquartered in Philadelphia at Drexel University’s Institute for Women’s Health and Leadership, is a national coalition advocating for women’s economic, political and social equality in the United States. In 2011, the National Panhellenic Conference became a Vision 2020 National Ally. Since then, we have been supporting the work of the Vision 2020 staff to make equality a national priority through shared leadership among women and men with an initial focus on business and government, where decisions are made, policies set and resources allocated.

The national goals of Vision 2020’s Campaign for Equality are: 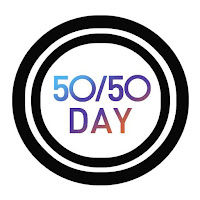 In May 2017, Vision 2020 held a 50/50 Day event in Philadelphia that focused on gender equality and included a screening of a short film from Let It Ripple. Through the organizers’ grassroots efforts, more than 10,000 individual events also were held across the U.S. and in 60 countries. Events were held from Times Square to Kenya – all viewing the same film at the same time. The first event also included coverage on the Times Square billboard, ABC News, NPR, Variety, Bloomberg and Time Magazine. What a powerful statement that makes!

Early success of the film's screening inspired organizers at Vision 2020 to plan a second 50/50 Day event for April 26, 2018. As a National Ally, NPC is encouraging College and Alumnae Panhellenics to watch the 20-minute film followed by a facilitated reflection and discussion using the questions found here.

Sorority women can also join the conversation through the 50/50 Day social media campaign. I encourage you to write down your answer to this question, “In six words, what does a gender-balanced world look like to you?” With these six words in hand, take a selfie with your written answer and post it to Facebook, Twitter and Instagram with the hashtag #Gettingto5050. If you also tag @npcwomen, we’ll be able to share your posts too.

In January, at NPC’s College Panhellenic Academy, participants had the opportunity to view the 20-minute film. As I was walking out of the room with the young women and fraternity/sorority advisors, the comments I heard included: “Powerful ... Emotional ... What a great film ... Why didn’t we know about 50/50 Day?”

I asked a group of students, “What are your take-aways from the film?” Their responses included: “We need to tell a new story of abundance … Female leaders go all the way back to the Roman Empire in A.D. 60 or 61 … Having a mentor makes a difference in the push to success.”

Join me and thousands of other men and women as we rethink the past, present and future of women in leadership. The short film can be viewed here. If your College or Alumnae Panhellenic would like to sign up to host a 50/50 Day event in 2018, you can do so here.