Over time, sorority membership ebbs and flows for a myriad of reasons. Continuous Open Bidding is the way to make sure chapter membership remains at a level that is consistent with the other chapters on a campus. Before diving deeper, there are a few terms to make sure you really understand:

Total: This is the maximum number of members a chapter may have. It has year-round significance and automatically re-adjusts each fall and spring. When you have primary recruitment, it changes right after Bid Day. When you don’t have primary recruitment, it changes within seven days of classes beginning. Total is set on each campus a little differently, and the method should be stated in a Panhellenic’s recruitment rules. Most campuses use the size of the largest chapter, the average chapter size or the median chapter size. When a chapter on a campus falls below the campus total, the chapter is permitted to recruit new members to reach total again. Because of the way total is set, most, if not all, chapters within a Panhellenic will be able to take new members during the year.

Quota: When a chapter participates in bid matching, quota is the number of members that may match with a sorority. Reaching quota is the only time that a sorority’s membership may grow above total. Because quota is related to bid matching, it happens once yearly and has significance to that primary recruitment cycle.

Continuous Open Bidding (COB): Sororities use this process to recruit women and grow their chapter to total. COB begins when total is reset and ends when classes end for that term. Eligibility to grow to total is an opportunity offered by your Panhellenic. While it is recommended that all eligible chapters use COB to grow to total, it is not required by the Panhellenic. Forfeiting an opportunity to host COB is like not collecting a tax return. You do not have to do it, but you’re leaving something valuable on the table if you do not.

Snap Bid: Snap bids are offered by chapters that do not match to quota in bid matching during primary recruitment. Snap bids are given out before bids are distributed on a campus’s bid day. They are not to be confused with COB bids. If bids have been distributed on your campus, everything else is a COB bid.


Why is Continuous Open Bidding important?
Continuous Open Bidding (COB) allows a sorority to close the gap in terms of membership. Because all chapters are allowed to recruit to total each fall and spring, most chapters are really close to that number. Because the chapters that are below total are only a few below, it doesn’t take many new members to grow back to total. Because the chapters that are above total are usually only a few over, the chapters above total at the beginning of the term have gone below it by the end of the term, meaning almost every sorority has the opportunity to recruit through COB during any given school year. Almost certainly, every chapter goes below total at least once during a student’s four year time on a campus, so everyone should stay abreast of COB strategies. And again, it is recommended that every sorority take every opportunity to grow to total through COB.

Think about it this way:

As you can see, in the matter of a few semesters, Sorority E went from six over total to six-under total, just by not utilizing COB. If they continue to neglect COB, that gap will quickly grow. You can see that the chapter isn’t losing large numbers of women and you can tell by the change in quota and total that membership is growing and the other chapters are staying closer to total, most likely by COB. These gaps of two and three and even six are manageable. But, as COB is neglected, the gap can grow to an unmanageable number, leading that chapter to eventually become far below total. Chapters that are strong in recruitment are not just strong during the primary recruitment process but capitalize on growth opportunities all year round.

Scenarios that lead to COB opportunities:
·        Sorority A is one of seven chapters on a campus.
o   The campus uses median chapter size as their campus total.
o   Last term, the median was 75 and Sorority A had 76 members.
o   Primary recruitment was held during this academic term.
o   After every sorority lost members to graduation and attrition, each chapter also matched to quota, which was 20.
o   The new median size is 80.
o   Sorority A was at 82, but 6 new members have withdrawn, leaving the chapter at 76.
§  They have room to recruit four more members.
·        Sorority B is one of four chapters on a campus that uses average chapter size to calculate total.
o   Sorority B is new and established last fall was set at 60.
o   When the sorority came to campus, they invited 60 women to join.
o   All but five were initiated and five more graduated at the end of the term.
o   It is the new term and Sorority B has 50 members.
o   Other sororities lost a few members as well and the new average is 58.
§  Sorority B can invite eight more women to join.
·        Sorority C is on a campus with three sororities.
o   They use the largest chapter size to determine total.
o   Last term, Sorority C was the largest on campus, with 36 members, so total was 36.
o   This term, they have 31 members, but the largest one has 34.
§  Sorority C can recruit three more members.
·        Sorority D is on a campus with 15 sororities and uses median chapter size to determine total.
o   Sorority D is a very strong chapter on the campus and matches to exact quota each year in primary recruitment.
o   Members rarely resign from the sorority. But, they are academically strong and they have a higher number of early graduates that the other sororities.
o   Total is typically around 150 on this campus and Sorority D usually has at least 10 graduates early each year.
o   While Sorority D has excellent retention, they are losing members to graduation and are often six to eight women below total at the beginning of the non-primary recruiting term.

As a College Panhellenic, here are steps you can take to help every chapter grow to total:

From the NPC Chairman: NPC continues to lead efforts to end hazing

September has arrived and with it brings National Hazing Prevention Week™, set for Sept. 23-27, that offers an opportunity for college campuses, schools, communities, organizations and individuals to raise awareness about the importance of eradicating hazing and promoting hazing prevention.

The National Panhellenic Conference (NPC) has denounced hazing for more than 40 years, beginning with a resolution in 1977 to encourage our member organizations to forbid hazing. In 2014, NPC adopted a formal position statement against hazing referencing Unanimous Agreement IV. Standards of Ethical Conduct and outlining that each NPC member organization has its own set of bylaws, policies and rules condemning hazing and governing the investigation and discipline involving hazing allegations.

Last September, NPC joined the North American Interfraternity Conference (NIC) and parents who tragically lost children as a result of hazing to form an Anti-Hazing Coalition focused on pursuing and strengthening state hazing laws and significantly expanding education and training for high school and college-aged students. This group worked many months developing model anti-hazing legislative language we hope state legislatures will use as a template as they introduce legislation focused on the priorities of anti-hazing education, transparency about hazing incidents and accountability for those who haze.

In January 2019, NPC reaffirmed support for the bipartisan Report and Educate About Campus Hazing (REACH) Act (H.R. 662), which would require colleges and universities to disclose information about hazing on campus in their annual crime reports. It would also require any college or university that accepts federal funding to provide hazing prevention education to all students. Rep. Marcia L Fudge (D-Ohio) and Rep. David P. Joyce (R-Ohio) are original co-sponsors of this important bill.

On June 13, 2019, Rep. Fudge and Rep. G.T. Thompson (R-Pa.), introduced the Educational Notification and Disclosure of Actions risking Loss of Life (END ALL) Hazing Act (H.R. 3267). This Act requires each institution of higher education that receives federal student aid to maintain and update biannually a website page that discloses student organization violations of the institution’s code of conduct that threaten the safety of students. The report would detail the corrective measures imposed by the school on the student organization allowing students and parents to make more informed decisions about which student organizations are safe to join. In addition to NPC and NIC, the following organizations also endorse the legislation: Association of Fraternity/Sorority Advisors (AFA), Association of Fraternity Leadership & Values (AFLV), Northeast Greek Leadership Association (NGLA), Southeastern Greek Leadership Association (SGLA) and HazingPrevention.org™.

As we work to advocate for and preserve the sorority experience, NPC continues to lead efforts to eradicate hazing and partner with government officials, parents in the Anti-Hazing Coalition, other fraternal umbrella organizations and others who share our common interests to help develop sustainable solutions to create safer campus cultures where students advocate for one another. 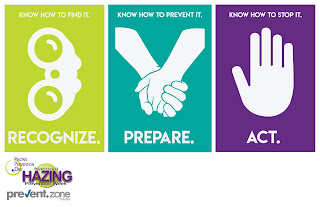 National Hazing Prevention Week (NHPW) is observed the last week of September each year, and the intention is to get campuses, schools, communities and individuals to come together to end hazing. Everyone is encouraged to have discussions about hazing in their communities, raise awareness about the problem of hazing, educate others about hazing and promote the prevention of hazing. Visit the NHPW website to learn more and follow NPC on social media for posts during NHPW.

Posted by loretta@npcwomen.org at 4:16 PM