The National Women's History Project’s theme for the 2018 Women’s History Month is “Nevertheless, She Persisted: Honoring Women Who Fight All Forms of Discrimination Against Women.” The National Panhellenic Conference is spotlighting sorority women who have persisted with courage and conviction, particularly in breaking down barriers for other women.

The next sorority woman in our series is both following in the footsteps of other women as well as blazing a trail.

Shaesta Waiz, Theta Phi Alpha, is the youngest woman to fly solo around the world in a single-engine aircraft. She completed her travels in October 2017.


But, her journey has never been easy.

She was born in a refugee camp in Afghanistan. Her parents immigrated to America, where she then grew up in an underprivileged neighborhood in Richmond, California.

To achieve her dream of becoming a pilot, she attended Embry-Riddle Aeronautical University with the help of scholarships and donor support to fund her education.

In an article in National Geographic, Waiz indicates Jerrie Mock, Phi Mu, the first woman to fly solo around the world – also in a single-engine plane – as her inspiration and mentor.

While Mock’s 1964 journey focused on speed, Waiz had a different mission: to empower women around the world to pursue STEM and aviation careers. Waiz used the stops along her journey to talk to women and children about pursuing their goals.

Waiz also has founded a nonprofit organization called Dreams Soar to help bring awareness of STEM careers and to eventually fund STEM and aviation scholarships for girls and young women.

Today, only 24 percent of U.S. STEM professionals are female and there are only 450 female airline captains worldwide. Waiz hopes to change that.

As Waiz told the BBC during her trip around the world, her message is that you can be “from any background, you can have any set of challenges but what’s really important is that you have to dream, to dream big and work hard and go after it.”

Posted by loretta@npcwomen.org at 10:18 AM

The National Women's History Project’s theme for the 2018 Women’s History Month is “Nevertheless, She Persisted: Honoring Women Who Fight All Forms of Discrimination Against Women.” The National Panhellenic Conference is spotlighting sorority women who have persisted with courage and conviction in their efforts to help end discrimination and break down barriers for other women.

The next woman to be highlighted in this blog series is Margaret A. Brewer, an alumna of Zeta Tau Alpha at the University of Michigan. Brewer was the first female general officer in the United States Marine Corps.

After her college graduation in 1952, Brewer joined the Marine Corps, serving at a time when few women were Marines. She held a variety of roles in the Marine Corps, including rising to the rank of colonel in 1970 and serving as director of women from 1973-1977.

She then served as deputy director of the information division for the Marine Corps. When she was nominated in 1978 to lead the division, the director position was required to be a general – a role not available to women Marines at that time.

President Jimmy Carter made a special appointment to promote Brewer to brigadier general and it was approved by both houses of Congress. Under her leadership, the department was reorganized into the Division of Public Affairs.

Brewer was honored with the Outstanding Achievement Award from the University of Michigan in 1979 and two Legion of Merit awards from the Marine Corps. She received Zeta Tau Alpha’s Outstanding Alumna Award in 1984. 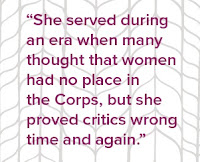 Brewer retired from the Marine Corps in 1980 and passed away in 2013 at the age of 82. In her obituary in The Washington Post, Brewer is described as “legendary” and “one of the pioneers.” Marine Corps Commandant Gen. James Amos said in a statement to the paper: “She served during an era when many thought that women had no place in the Corps, but she proved critics wrong time and again.”

Posted by loretta@npcwomen.org at 6:47 AM

This year’s Women’s History Month theme is “Nevertheless, She Persisted.” Most certainly, I equate this theme with the women of the National Panhellenic Conference. We are persistent as we advocate for the sorority experience and work to preserve the single-sex experience. And we are persistent in ensuring our sorority and fraternity communities stay vibrant and healthy.

In 1961, when negative opinion of social organizations was at its highest, NPC was persistent and adopted a twofold strategy: to reaffirm the constitutional right of fraternities to exist by virtue of freedom of assembly and to make an energetic stance toward re-educating the public about the value of sororities.

For more than a decade, while many campuses became epicenters of social unrest for reasons that went far beyond the fraternity/sorority system, NPC walked a precise line in asserting the autonomy of its member organizations and maintaining constructive communication with host institutions. One triumph of collective, persistent action was NPC’s lobbying for the continued legality of single-sex status for fraternities and sororities. This status gained partial protection in 1974, when the U.S. Congress passed an exemption to Title IX of the Education Amendment of 1972 to allow colleges and universities to recognize single-sex social organizations.

As new issues continue to arise and our member organizations evolve, new opportunities and challenges are presented that profoundly impact operations and strategy of NPC. We will continue to be persistent by working to protect students’ rights to freely associate with a single-sex organization and preserving the rights of single-sex student organizations—so women can continue to benefit from the sorority experience now and for years to come. 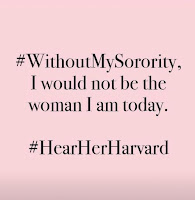 How you can get involved:


Posted by National Panhellenic Conference at 6:21 AM

Women’s History Month is celebrated each March, and the National Women's History Project has selected "Nevertheless, She Persisted: Honoring Women Who Fight All Forms of Discrimination Against Women” as the 2018 theme.

During Women’s History Month, the National Panhellenic Conference will spotlight of a number of sorority women who have persisted with courage and conviction in their efforts to help end discrimination and break down barriers for other women. This is part one in that series.

Since today, March 8, is also International Women’s Day, which celebrates the social, economic, cultural and political achievement of women, we are pulling from our blog archives to highlight the work of two sorority women who, in their lifetimes, have helped lead the press for progress for women.

“In the adjustment of the new order of things, we women demand an equal voice; we shall accept nothing less.”

Carrie Chapman Catt, a member of Pi Beta Phi, was a notable women’s suffragist and founder of the League of Women Voters. To pay for her education, she worked as a teacher and she was the only woman in her graduating class in 1880. Later on, she became superintendent of schools, becoming one of the first women in the county to be named to such a position. She was involved in advocacy all of her life. In addition to her work at the League of Women Voters, she supported the formation of the United Nations.

“Our goal in the ‘70s was to end the closed door era. There were so many things that were off limits to women: policing, firefighting, mining, piloting planes.”

Justice Ruth Bader Ginsburg, a member of Alpha Epsilon Phi, has served as a United States Supreme Court Justice since 1993. During her time as a law student and professor, she broke many barriers for women. In 1971, she played a major role in the creation of the Women’s Rights Project of the American Civil Liberties Union (ACLU). At the ACLU, she appeared before the U.S. Supreme Court with six landmark cases on gender discrimination. And, in 1999, she received the American Bar Association’s Thurgood Marshall Award for her contributions to gender equality and civil rights.

Posted by National Panhellenic Conference at 7:55 AM